Well y’all, I went to NASA for the SpaceX Falcon Heavy rocket launch in June. I was lucky to participate in #NASASocial, a two day program for space geeks who love social media, and it was freakin’ incredible.

What is #NASASocial? A few months ago I was scrolling through Twitter, just looking for my daily news and quality memes to scream laugh at, when I saw that NASA shared an opportunity for space enthusiasts to apply for their #NASASocial program, a two-day immersive experience at the NASA Kennedy Center in Titusville, FL.

The details? Around 50 people are chosen to tour NASA’s facilities and visitor’s center, get up-close-and-personal talks with top technology experts, interact with members of the Department of Defense, and witness a dang SpaceX Falcon Heavy rocket launch. Um, count me in. I applied, citing my previous journalism work and current science fiction obsession that runs through my editorial photography. But I didn’t actually, seriously think I would make it in. NASA just seems so huge, you know? I was like, “Haha cool yeah let’s apply, this would be amazing but don’t get your hopes up.” In fact, I completely forgot about it until I got a message in late May from a suspiciously official looking email that basically said, “Hey girl, you’re on the waitlist, hang tight.” WHAAAT??!!!!

This was such an exciting moment for me. I was happy to even be on the waitlist! But I was nervous because the launch was set for a date I already had a wedding to shoot! Even if I did get in, I was booked. “If only they’d move the launch date by like, one day,” I thought to myself. I got an email saying I was in, so I decided there was no way I was going to NOT go. Just absolutely NO way I wasn’t going to NASA. Even if I had to drive straight from the end of the wedding to be in Florida the next morning, I was getting there. Well, it is a rocket launch and so many factors go into play here like weather, space and, you know, intense science stuff, that when I got my next email saying the date had changed by literally one day, I was shook. SHOOK. I was going to NASA (immediately after that wedding, turns out) and there was no stopping it. (SHOOT YOUR DANG SHOT AM I RIGHT?!)

A 12-hour wedding gig and a 12-hour drive later, I was in Titusville, Florida with one hour to spare before the two-day program officially started. The program itself is immersive as heck, you’re literally touring around in a big bus on NASA’s Kennedy Space Center campus (which is HUGE), getting access to facilities and technology that usually only NASA employees and the media gets access to. Our first stop was actually at the NASA Media Center (pictured above) where we heard from some incredible scientists and astrophysicists about the technology that hitched a ride on this launch specifically.

After the tech demonstration we got a big group photo in front of the infamous rocket launch countdown clock, then it was off to the Kennedy Space Center Visitor’s Center for free time exploring. The KSC Visitor’s Center is so much fun, but lemme tell you something, Florida weather is no joke. One minute I was scorching, burning up, literally dripping sweat into my eyeballs trying to take pictures of all things space and NASA…the next I was running from actual lightning striking in the rocket garden that was less than 20 feet away from me. (A little poetic, yeah? Lightning striking a rocket that’s intended to be out of reach, away from the confines and nature of Earth to explore what lies beyond. I guess it could also be ironic.) Chaotic weather aside, the Visitor’s Center is EPIC – like Nashville’s Adventure Science Center on crack type epic. By the time about 6 p.m. rolled around, I was insanely exhausted and passed out I think for a solid 12 hours.

Day 2 was much more intense, hopping on and off the bus to explore the giant, concrete launch pads where 12 Apollo missions blasted off from. Launch pad 39B first, and then 39A. Sunny and about 1,000 degrees. Huge slabs of stone and metal and machinery – launch pads where history was made, and where the future will also be made. The thick, swampy Florida heat combined with the anticipation of the SpaceX launch that night, and the gravity of the structures that stood before us, was somehow both polarizing and a bit supernatural at the same time. What interests me is just how massive the NASA network itself is – there are so many departments, people and skills necessary in order for space exploration to even begin to function, for it to continue to thrive and for society to maintain a tangible interest in space. I spotted a man working at the first launch pad we visited, taking a break from the heat amongst all of the concrete and technology that seemed to match him. He was in his element. I couldn’t help but nab a photo, his reflection in the puddle in front of him somehow reflecting this entire experience in my eyes: Surreal. 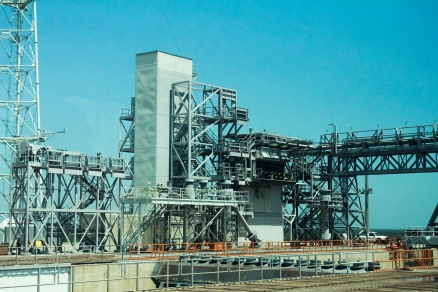 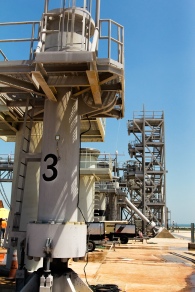 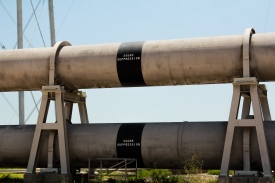 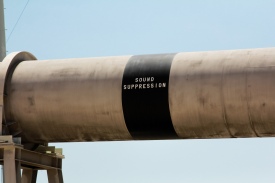 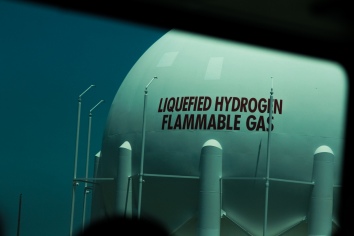 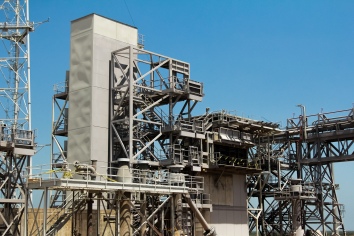 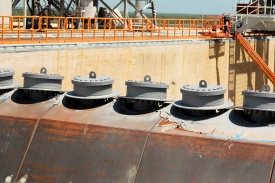 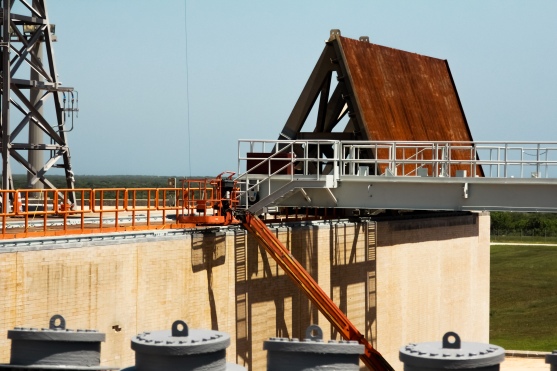 We shuttled over to the second launch pad, and through NASA’s flat, winding roads we turned a corner to see the Falcon Heavy rocket in the distance, perfectly offset by the SpaceX building in the foreground.  Fenced in twice and surrounded by cameras wrapped in protective boxes, we could only get so close to the Falcon Heavy but man, did it loom. Rockets are massive, but that word doesn’t quite capture the grandeur of its size, or how small you feel when you see one in person, even from a mile away. Hold on…did someone just say they spotted a rogue Elon Musk, coming to say hello to us lowly Instagram-posting, Tweet-baiting,  Facebook-ers with #NASASocial? (haha, no, lolol, they didn’t, but the rocket was incredible nonetheless) 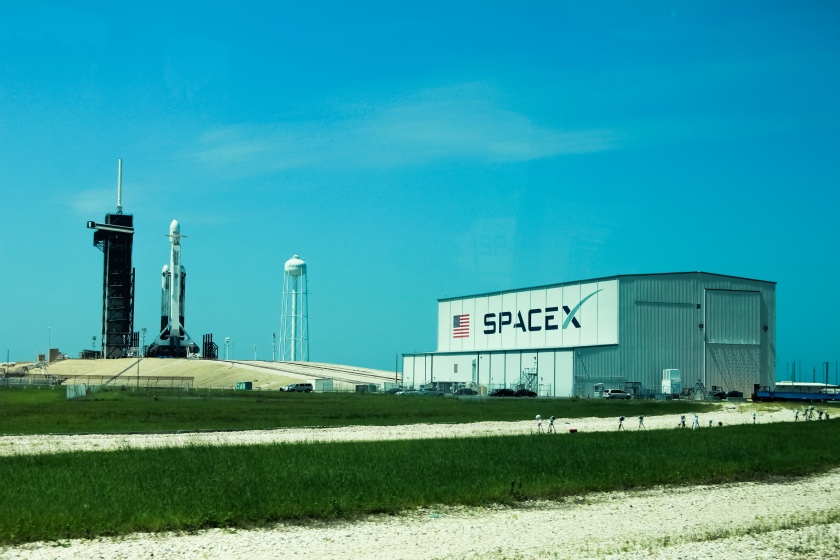 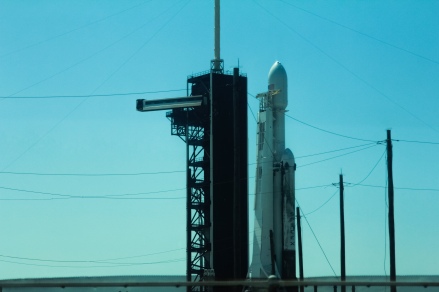 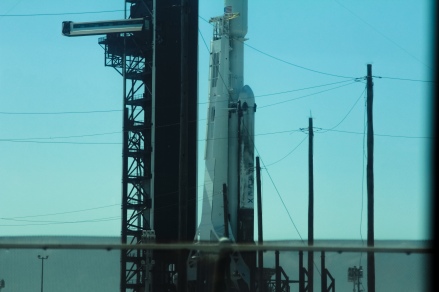 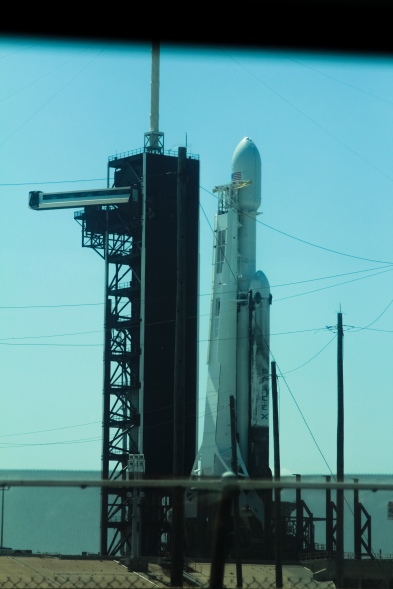 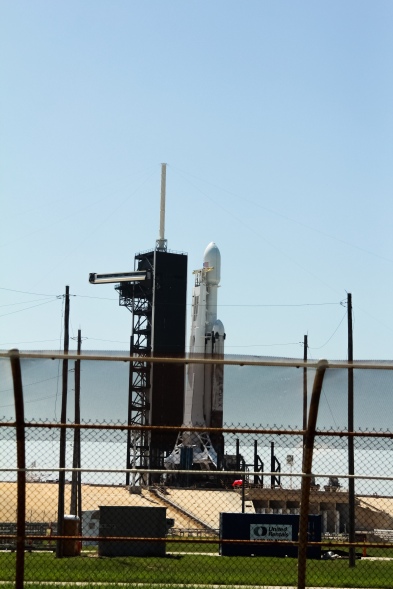 Everything during the program felt like a deliberate build-up to the launch that was to come that night. The tech demonstrations informed us on what exactly was happening and why it mattered for the future. The Visitor’s Center taught us about NASA’s history, and let us explore our inner child and feel excited about space. Seeing the launch pads in person cemented for us the gravity of the situation, and waiting for the Falcon Heavy that was to launch at 9:30 p.m., now delayed – anxiously checking our emails, our Twitters, then waiting for the launch that would finally happen at 2:30 a.m. – further stretched the anticipation. The bus finally shuttled us to a flat grassy spot next to the river, six miles away from the launch pad where the Falcon would soon depart for space. I was sleepy, but excited. It was dark, but not for long.

This wasn’t a moment that I managed to get the best photographs out of. Even with the 6 miles between the media site where we were and the launch site where the Falcon was, the air vibrated, the ground shook and my brain just…didn’t compute anything else when the 10-second countdown ended and that dang rocket lit up the night sky. It was all I could do to keep my phone steady for an Instagram live feed. The atmosphere seemed to go from pitch black to near daylight, just like that. When the booster separated, it looked like a nebula, or some far off galaxy that had been brought right up to us here on Earth.

I’ve never seen anything like it in my entire life.

The experience with NASA Social was visceral, and I highly recommend that anyone interested in space apply. There is no set criteria for an applicant. It helps if you have a presence on social media, but you don’t have to pull in a specific number. Some people in the program had a couple hundred followers, some had followers in the 20,000s. The main thing NASA Social wants is people who will take what they learned back to their communities, both online and off. The deadlines to apply for the remaining NASA Socials this summer have already passed, but if you want to stay in the loop about future Social events I definitely recommend signing up at the link here. 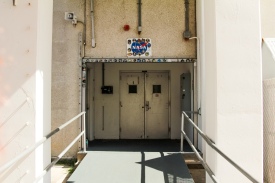